Bombs Away : The Story of a Bomber Team [Paperback]

In what is introduced as essentially a propaganda piece for U.S. involvement in World War II, Steinbeck, winner of the Nobel Prize for Literature in 1962, extols the training and roles of the members of a bombardier team in the country's fledgling Air Force. The book includes a government report among the works cited, and photographs of the men and their planes. Originally published in 1942 by Viking Press. Annotation 2010 Book News, Inc., Portland, OR (booknews.com) 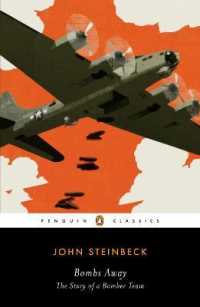