Bollywood : The Films! the Songs! the Stars! -- Hardback [Hardcover]

Discover historical insights, lesser-known facts, and incredible photography of iconic movies including Mother India, Mughal-e-Azam, Sholay, and Bajirao Mastani with this gorgeous celebration of the world's biggest film industry. Bollywood charts the world of Hindi cinema year-by-year from the pioneering studios of the 1930s, through the Golden Age, to the age of Big Money in the 21st century and it's biggest modern stars. With over 1,000 films produced every year, the glitter and charm of Bollywood is unrivalled anywhere else in the world. Bollywood takes you on a behind-the-scenes tour of Hindi cinema's biggest blockbusters, with stunning film stills and plot timelines, as well as insightful biographies of iconic stars including Dev Anand, Amitabh Bachchan, Deepika Padukone, and Shahrukh Khan. Bring the spectacle home and be enchanted by the glamour and colour of Indian cinema with this glittering homage to Bollywood! 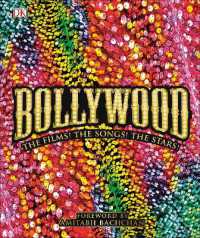